Why Some IBM Salespeople Will Be Required To Use Macintosh Computers 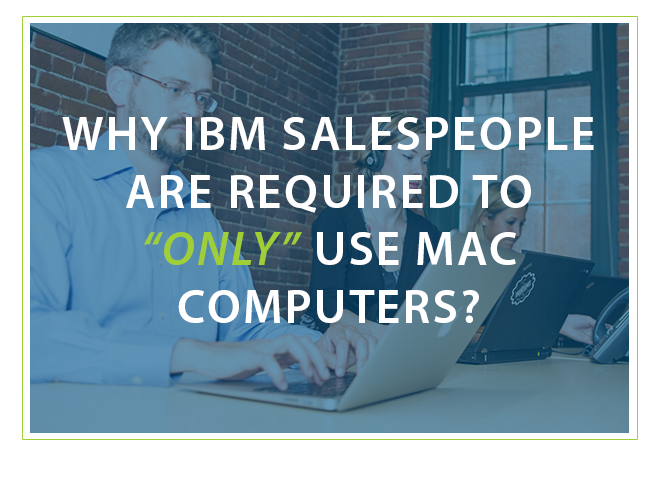 “If, for some reason, we make some big mistake and IBM wins, my personal feeling is that we are going to enter a computer Dark Ages for about twenty years.”

At the time of this quote, IBM and Apple were competing in the personal computer space and quotes like this were not uncommon. A lot has changed in the 30 years since. Both Apple and IBM have evolved into market leaders with two different strengths:  Apple in Mobility and IBM in Big Data.

Any differences between the companies were put aside in 2014 when Apple and IBM announced a strategic and exclusive partnership that combines the market-leading strengths of each company to transform the enterprise.

Tim Cook has commented,  “For the first time ever, we’re putting IBM’s renowned big data analytics at iOS users’ fingertips, which opens up a large market opportunity for Apple. This is a radical step for enterprise and something that only Apple and IBM can deliver.”

Apple and IBM’s shared vision for this partnership is to empower business professionals everywhere via specialized, vertical mobile business applications that leverage the unique capabilities of Apple’s iPads and iPhones.  At their core, these applications are intended to “unleash” the power of each business’s knowledge, data, analytics and workflows.  Specifically, Apple and IBM are teaming together to deliver the essential elements of enterprise mobile solutions:  Apple is providing the mobile device / OS while IBM is developing and providing the specific mobile iOS-based applications.

Once again, it is indeed Apple’s iOS-based mobile devices – both iPhone and iPad - that are foundational to this relationship.  However, as a powerful side effect, Apple’s long-time Macintosh computer systems stand to gain substantially as well.

This will potentially be brought about by one of the unique aspects of this new partnership:  the requirement that IBM salespeople use only Macintosh computers for their presentations. UBS analyst Steven Milunovich notes,

“IBM sales people are only to have Macs with them running Keynote presentations developed by Apple.”

This agreement from IBM shows that they are fully committed to this new endeavor. The ability to demonstrate features of the MobileFirst platform on the Mac only makes sense.

Recently, articles have begun to surface that detail high-level discussions between IBM and Apple, Inc.  And these would suggest that indeed this commitment might potentially bolster IBM as Apple’s largest Macintosh client.

Read more on this: